A disturbing video shows a group of police officers trying to pull a 1-year-old child from the arms of his mother, who is lying on the floor of a social services office in Brooklyn.

The NYPD called the video "troubling" and said the encounter was under review.

"No mother should have to experience the trauma and humiliation we all witnessed in this video,” Public Advocate and Attorney General-elect Letitia James said.

The video shows 23-year-old Jazmine Headley laying on the floor of the Human Resources Administration office on Bergen Street on Friday with a group of police officers surrounding her. 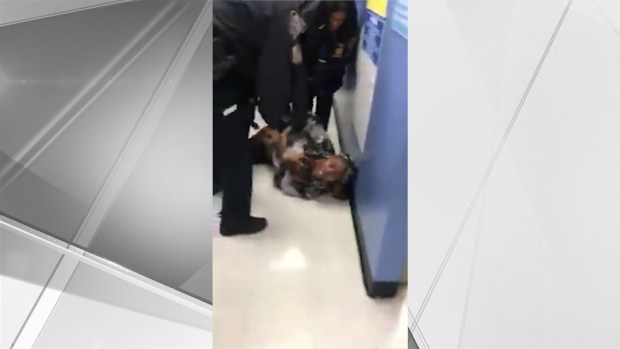 At one point, an officer is seen forcibly ripping the child from the mother's arms, but Headley doesn't let go. Other people in the crowded office screamed, "Oh my God!" and "Look what they're doing to her!"

At least one officer brandished a stun gun.

The NYPD said they were called after HRA officers and staff were unsuccessful in removing her from the facility. They cited disorderly conduct and said she was blocking the hallway.

Nyashia Ferguson, who shot the video, said on Facebook that Headley was asked to leave when she sat down on the floor because all of the chairs were full.

“Being poor is not a crime," Letitia James said. "The actions of the NYPD in this video are appalling and contemptible."

She called for an investigation and a "transparent accounting of how this horrific situation occurred."

Headley, of Brooklyn, was charged with resisting arrest, acting in a manner injurious to a child, obstructing governmental administration and criminal trespass, the NYPD said. It's not clear whether she has an attorney.

Police said there was also a warrant for her from Mercer County, New Jersey. The details of that case weren't immediately known.

She refused medical treatment for both herself and her son, police said. A family member took custody of the child.

No officers were harmed.

admin - July 18, 2018
0
Advertisement Advertisement Has Mikey Goldsworthy given away that Dua Lipa has been chosen for the..

Fox and Friends Meteorologist with MS Slams Viewer Who Complains About...

‘Ruiz has him by the balls’: Promoter Bob Arum critical of...