The estranged husband of a missing Staten Island, New York teacher and mother of three, as well as his girlfriend, were arrested on murder charges Friday, a day after a body charred beyond recognition was found in a storage facility a few miles from where she lived, NYPD sources tell News 4.

Jeanine Cammarata, 37, had been missing for nearly a week before the burned body was found in a garbage bag, surrounded by air fresheners, at a sprawling storage center in her home borough. Ayisha Egea, the girlfriend of Jeanine Cammarata's estranged husband Michael, was the one who pointed investigators to the site, a senior law enforcement official told News 4.

The husband was also captured on surveillance footage at the facility, the senior official said. Now both are accused of second-degree murder, concealment of a human corpse and tampering with physical evidence, according to a criminal complaint.

The murder charges come as the medical examiner's confirmed Friday that the body found was "positively identified as Jeanine Cammarata, with a positive identification made through dental records."

Body Found May Be Tied to Missing Teacher 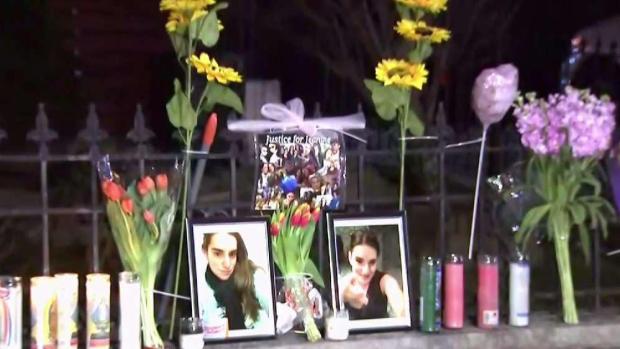 Investigators previously said that the body had been burned so badly it was completely unrecognizable.

Jeanine Cammarata, a public elementary school teacher on Staten Island, hadn't been seen publicly since Saturday night at her home on Staten Island. Eric Gansberg, who is representing Cammarata in ongoing divorce proceedings against Michael Cammarata, told News 4 the missing woman had been heading to her husband's Queens home to see their children the night she disappeared.

The NYPD confirmed at a briefing Thursday afternoon that Jeanine Cammarata had last been seen en route to Rockaway, Queens, from her home. Cops said they're still looking for Jeanine Cammarata's vehicle, a 2017 white Chevy Cruz.

Gansberg said Jeanine Cammarata was "terrified" of her estranged husband, and that if something nefarious happened to the woman, it was likely at his hands.

Gansberg said Michael Cammarata had custody of the children because Jeanine was living in an apartment she felt wasn't suitable for them. Jeanine Cammarata worked two jobs — one at an elementary school and one at a Dollar Store — and hasn't shown up for either of them this week, which prompted a missing persons report. The couple had no legal custody agreement involving the children.

According to Gansberg, they had lived together but started having problems in 2017. They fought, had orders of protection against each other that were later rescinded and were in the middle of getting divorced. GansbRead More – Source

Rahul Bose to start shooting for Baahubali prequel in December

When are BST 2019 tickets for Robbie Williams on sale as...

Three men exonerated in Baltimore after 36 years in prison for...

Disney Might Be Ready to Break Ties with John Lasseter for...

admin - October 19, 2018
0
What to Know A Manhattan high school was placed on lockdown Thursday after someone brought an imita..