But a less prominent feature of this emerging tourist destination could add another attraction to this list in years to come: the unassuming Kitakyushu Kartway race track. It was there that a rising Japanese MotoGP star first took to the circuit.In March, at a thrilling season opener in Qatar, 19-year-old Kaito Toba made history as the first Japanese rider to win a Moto3 race, and the first in the sport's entry-level lightweight class in 12 years. He is the standout talent in an exciting crop of young Japanese racers and tipped for big things. Slight, fresh faced and quietly spoken, Toba patiently recounts his first experiences on two-wheels to CNN Sport. "When I was a child my father and mother rode motorbikes, and I liked riding with them," he explains. "I wasn't aware of racing or MotoGP or anything like that, but my parents bought me a small pushbike, and after that I would go to the park, and I liked that a lot." 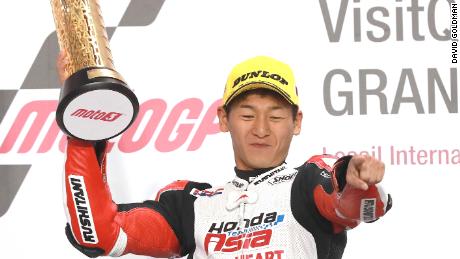 READ: MotoGP — The King of COTA is deposed
READ: How to drive a 225kph electric race car

Like so many successful riders, Toba's step up to motorized transport began early. "When I was about three years old I started to like motorbikes," he said."My family tried to find a real motorcycle, like a pocket bike. When we found one, and the first time I rode it, it was an incredible feeling, I liked it a lot. Then I started wanting to practice a lot, and that was really the start."By the age of five, Toba was riding his pocket bike around Kitakyushu's curves. "At first it was really just for fun. But by the time I was six, I started to become aware of racing and MotoGP, and I found out we had a race in Japan," he recalls. Just a year later, Toba paid his first visit to Motegi and the Japanese MotoGP. He smiles broadly at the memory. "It was then I thought 'I want to ride here, I want to be a MotoGP racer.'" 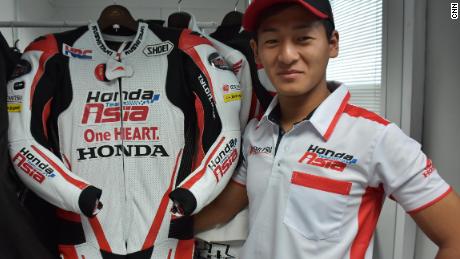 Toba's ascent to the MotoGP circus has come via the sport's grass-roots development 'Road to MotoGP' program. It was through this that he was exposed to the sheer scale of the championship in Europe. "I saw the tracks, the hospitality, it really was amazing," he grins. "And then I realized, more than ever before, that I wanted to be part of this. In Spain and Italy especially, you see incredible numbers of fans coming to races."Toba won the Idemitsu Asia Talent Cup in 2014 and clinched two race wins among four podium finishes in the Red Bull Rookies Cup in 2015 and 2016. As such his maiden Moto3 victory brought considerable satisfaction to Carmelo Ezpeleta, the CEO of MotoGP's administrators, Dorna. "After many years working behind the scenes and seeing so much promise from the ranks … it was a great moment to see Kaito winning in Qatar — becoming the first former IATC Champion to win a race." Ezpeleta told CNN Sport. "[Qatar] was also a very tight race and he demonstrated some great race-craft under pressure. We were really proud."MotoGP is headquartered in Spain, where the sport is followed obsessively, while Italy's Ducati and Aprilia, as well as riders like the legendary Valentino Rossi, ensure the sport is second only to soccer in Italians' hearts. However, Japan's Honda, Suzuki and Yamaha have dominated the MotoGP grid as well as the championship for many years. 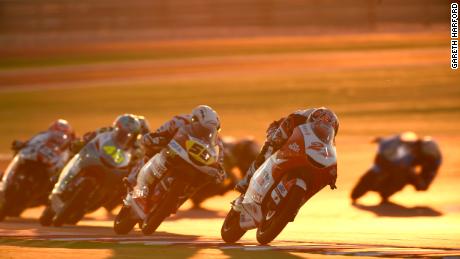 Given the ubiquity of Japanese motorcycles, it might be safe to assume that bike culture has a strong footing in the country, but as in the United States, motorcycle sales have been in sharp decline of late."Even though you have Honda, Suzuki and Yamaha, actually there's maybe a little less interest in motorcycles in general (in Japan)," Toba says. "You notice more people riding bikes when you travel internationally than you do in Japan. I don't know why that is, maybe it's people thinking about the danger, and I think also you see motorcyclists being a little crazy in the streets, and that puts people off."In this context, Tetsuhiro Kuwata, Honda Racing Corporation's Director, recognizes the importance of a successful Japanese rider. "We're really happy with Kaito, he's a talented rider and we've trusted him for a long time. We're working hard with the young Japanese and Asian riders, because it's important for us from the sporting point of view, but also the market. We hope that with Toba and guys such as (LCR Honda MotoGP rider) Takaaki Nakagami they will help to grow even more." Ezpeleta agrees: "It's always important to have riders representing Japan and if one of those is a frontrunner, that's even better for the World Championship. This country is truly a point of reference fRead More – Source

Sacha Baron Cohen: “It Would Be Impossible” to Make More Who Is America?

Stephen Fry steps down as BAFTA host after 12 years

Chitrangada Singh: There is a MeToo movement in Bollywood without a...

17 Cuban artists: All That You Have Is Your Soul

US actresses praise British ‘sisters’ for standing behind Times Up at...

admin - December 29, 2017
0
The Serbian former world No.1 has been sidelined with an elbow injury that continues to plague him (..