But when it comes to the big figures there are two drivers in the history of the sport who are in a class of their own — Michael Schumacher and Lewis Hamilton.Schumacher is a record seven-time world champion — a landmark that has stood for 15 years — and also owns a record 91 grand prix wins. But Hamilton is chasing his numbers hard, already eclipsing the German great's total number of pole positions and most front row starts, among many others. "In terms of raw numbers, only Schumacher can be mentioned in the same breath as Hamilton," US-based motorsport statistician Sean Kelly tells CNN."Hamilton is the only driver to have won races in every season in which he has competed, and just as with Schumacher in his pomp, Hamilton seems to reach a new milestone at every grand prix. "He's very likely to be the first driver ever to win 100 grands prix and/or take 100 pole positions — and that's almost 10% of all F1 races ever run."This weekend Hamilton returns to the Silverstone circuit, less than 60 miles from where he grew up, with his sights set on a record sixth British Grand Prix. A victory at his home track would also nudge the 34-year-old one step closer to a sixth world title this season and tantalizingly close to Schumacher's world record haul.Many fans and Formula 1 insiders thought the German's landmark would never be bettered, not even by the all-conquering hero himself when Schumacher made a shock return to the sport with Mercedes in 2010.When the legendary German chose to step away from F1 for a second time, Hamilton inherited Schumacher's race seat in 2013 and now, with the merciless Mercedes at his fingertips, he is plotting a course to surpass all of Schumacher's statistical landmarks. But could factors on and off track put the brakes on Hamilton's golden era?

Rise of the Young Guns

The last race in Austria was a blockbuster reminder that the 'next generation stars' are emerging as a threat to Hamilton's current era of dominance.With the Briton hampered by a grid penalty and then front wing damage, the race to the flag was between talented 21-year-olds Max Verstappen and Charles Leclerc.READ: Verstappen gets controversional win after late passAfter a breathless duel, Verstappen,– who had fallen back to seventh at the start — muscled his Red Bull past the Ferrari for the win, ending Mercedes' winning streak at 10 consecutive races."We know that Verstappen is a great talent," says Ben Edwards, F1 commentator for Channel 4's UK broadcasts. "He is really going to be in prime form over the next couple of years. "Verstappen has picked up his game as team leader at Red Bull and they're working around what he wants. If he and Red Bull really get their act together next year that could be a major threat for Hamilton and Mercedes. 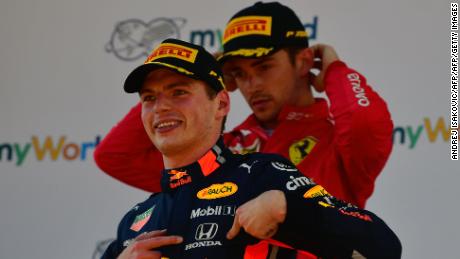 The F1 rumor mill was also churning in Austria with talk of a break clause in Verstappen's Red Bull contract, which currently ties him to the team until the end of 2020. There is even speculation that Verstappen could replace Valtteri Bottas at Mercedes next year which would give the Dutch dynamo exactly the same machinery to take the title fight to Hamilton and stop his run into the record books."Mercedes team principal Toto Wolff probably wouldn't want to put Verstappen alongside Hamilton from a team harmony point of view," says Edwards. "But he'd probably want him to stop him going anywhere else as he's going to be a threat wherever he is. "Hamilton would be up for it, as he has said, as he's always ready to take down anybody. It might mean Mercedes dominate but that would be awesome, an incredible mix."

Ferrari drivers Leclerc and Sebastian Vettel should, in theory, also be able to throw a spanner in the works of Hamilton's record-breaking ambitions, after all they started the 2019 season as favorites after impressing in testing.But the Italian team, who Schumacher spurred on to five straight team and driver titles between 2000 and 2004, just haven't had the luck so far this season, with both Leclerc and Vettel losing out on race wins.READ: Ferrari loses bid to appeal Vettel penalty"Leclerc has the potential to be a real star of the future," says Edwards. "He has already shown us he has what it takes and his mental attitude is fantastic."For the last 13 years either Hamilton or Vettel, who both made their F1 debuts in 2007, has been at the heart of the title fight, often sparring against each other."It's still possible that Vettel could put a world championship-winning season together," adds Edwards. "But it's a crucial time in his career right now."He's made too many errors and in this turbo-hybrid era I don't think he's ever had a car that totally talks to him in the way that the Red Bull did."Vettel is still a potential threat — but I don't see it happening this year."

The only driver to halt Hamilton in his golden era, which stretches back to 2014, has been his former teammate Nico Rosberg. In 2016, the German delivered an epic campaign to deny Hamilton what would have then been a fourth world title. But it was a bruising physical and psychological battle that saw Rosberg quit F1, unwilling to go head-to-head with his old friend again. His successor, Bottas, is arguably in the best position to stop Hamilton racing away to a sixth world title this season but after a brilliant start to 2019, winning in Australia and Azerbaijan, the Finn's challenge seems to be faltering."The problem for Bottas is sustaining that level you need to beat Hamilton," adds Edwards. "As we saw with Rosberg, it's so intense trying to take on and beat Hamilton and keeping it up all year long."I've been impressed with Bottas this year and I don't think his challenge has completely vanished. But he's definitely going through a rocky patch and this is the stage in the season where Hamilton traditionally starts to come on really strong."

It's not only rival drivers, however, that can turn purple patches into a dose of the blues. "F1 history is littered with examples of dominant drivers seeing their reign come to a sudden end," explains Kelly."Right now it seems like Mercedes and Hamilton will go on dominating forever, but when Vettel won four consecutive titles from 2010-13 he then failed to win a race in 2014."Schumacher himself won five consecutive championships with Ferrari and then just a single race in 2005."Both Schumacher and Vettel were halted not by drivers, but by changes to the F1 rulebook.In 2005 it was tires and in 2014 major new rules on engines effectively ended the Red Bull era and laid the foundations for Hamilton's four world titles thanks to the dominant Mercedes hybrid V6 engine. 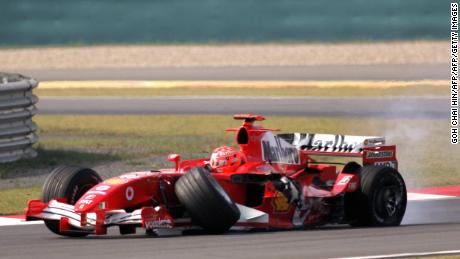 With a regulation shake-up planned for 2021 — potentially the season Hamilton goes for a record eighth title — should he be worried?"For 202Read More – Source

Explosion at military hardware factory in UK leaves one dead, one injured

Ireland well-placed to respond to growing no deal Brexit risk –...

Airborne Deer Slams Through Woman’s SUV, Lands in Back Seat

Labour party urges PM May to change her EU deal

Heres Why The 2018 Masters Champion Is Being Called Problematic